Donegal Woman’s Pop Up Pub’s Drone Video filmed along Donegal’s Wild Atlantic Way to appear on a TV Show in the USA this month! 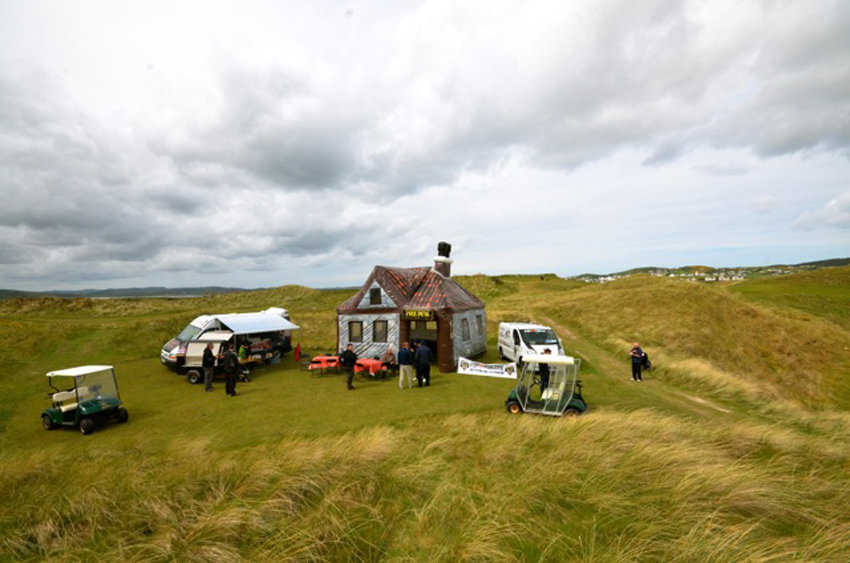 0
Share
Donegal’s biggest celebrity charity event held at Rosapenna Golf Course last May organised by Danny O’Carroll, also known as Buster Brady from Mrs Brownes Boys, featured a host of stars who took part in a charity golf day to raise money for the family of the the very sad tradegy at Buncrana Pier, Co. Donegal in 2016, when 5 people lost their lives and for Pieta House an Irish Charity, a non-profit organisation providing a specialised treatment programme for people who have suicidal ideation or who participate in self- harming based in Ireland.
Catriona Mulhern kindly donated the use of her “Pop Up Pubs” to this charity event which took place in the middle of the Golf Course on one of  the world’s most renowned courses, The Rosapenna Hotel & Golf Club located in a small fishing & seaside resort, along Donegal’s Wild Atlantic Way, Downings, Co. Donegal. The “Pop Up Pub” hosted a unique & quirky venue right on the golf course with a range of stars, popping in for a drink, having travelled to Donegal for the event. Celebrity guests included  Football stars Noel Hunt, Stephen Hunt, Kevin Foley and Peter Odemwingie who were joined by former Ireland legends Ronnie Whelan and Ray Houghton. Even Daniel O’Donnell popped in for his “Cup of Tea” tea and former Irish rugby star Shane Byrne and most of the cast from Mrs Brown Boys also popped in.
As it was a huge event, one of the biggest charity events in Donegal’s calendar year to date,  Catriona decided to commission a Drone Video which was then used to launch her Global “Pop Up Pub” Business.
To her amazement & delight, she was contacted in December by the producer of Meeting House productions based in New York who produce materials for TV Channels right across America, asking her could they use her Pop Up Pub Drone footage in their new show on truTV called “Greatest Ever” and they would like to feature the video in their upcoming “Parties” themed episode which is due to be aired in the States this month. They found the video on youtube while looking for extravagant parties. and they loved the idea of an Irish Inflatable Pub!
Catriona’s response was “How cool of you to find us all the way over here in Donegal, Ireland, we love our drone footage. The scenic ancient Donegal landscape and frame moves to an inflatable pub of all things. So, we would only be delighted if our footage was used as we have just launched our US & Canadian global corporate agent search this year and your timing is bang on”!
“We actually created the world’s first Irish Thatched Cottage Air Building ’The Thatch’  for the Ohio Celtic Festival last August and have  a bespoke Irish pub design in production for Hot Springs, Arkansas “The World’s Shortest St. Patrick’s Parade” and we have  many fun ideas on the way to the States at present for the St. Patrick’s Day & July 4th celebrations.”
Catriona, a mother of two from County Donegal launched her business in February 2015 after leaving her full-time job to start her own business and launched “Pop Up Pub”, which has become a global business providing themed air building for events everywhere!
Following the recession and the mass Donegal emigration of Irish relocating to the four corners of the globe, Catriona believes that her success to date in the states boils down to a “hankering after a piece of home.”  Her pubs, though  provide Irish expats with that taste of home. Catriona’s plan is to maintain the quality of her design and manufacturing of her inflatables, and has created a further range of Irish themed air buildings and structures which is receiving huge demand from a global audience.
“To think that anyone can have an idea, especially from a remote part of Ireland, but to establish it as a global brand to a wide range of markets & clients, for me has been an incredible journey, a journey that has really just started & to get this recognition from a TV production company in the States is a testament to those that have helped me along the way! We are going to be popping up in alot of places with unique, fun and quirky ways for the Irish Diaspora to share their piece of Ireland with their own “Irish Pop Up Pub Themed Parties” all over the world. Living in Donegal and working with clients in different time zones has never been a problem, the power of internet & social media has allowed us to connect with a wider audience than we could ever have dreamed of”!
Take a look at the Drone Video Footage which will be shown on truTV’s “Greatest Ever” show in the States this month.
https://vimeo.com/168414050
www.popuppub.com