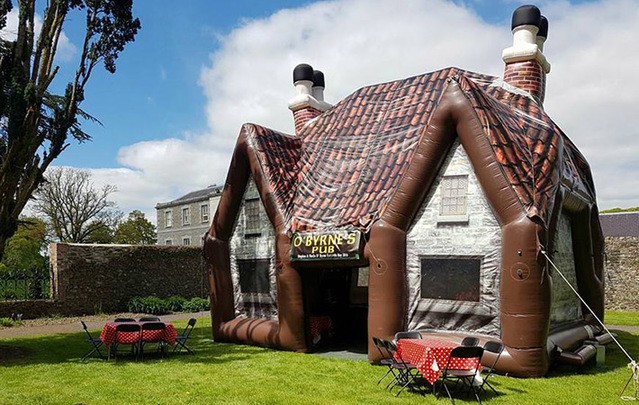 In February 2015 a mother of two from Ballybofey, County Donegal, quit her fulltime just and launched Pop Up Pub, providers of air building for events. Just over a year later Caitriona Mulhern’s business is spreading to New York.

After the success of the Pop Up Pub in Ireland after the last year Mulhern connected with and Irish American reseller in New York. They’ve even invented thatched cottage style Pop Up Pub that’s already on the market, named “The Thatch.”

Mulhern told IrishCentral that after an article, run on this site in February 2015, the interest from the United States and around the world in these  pop up pubs increased.

Following the recession and the mass Donegal emigration of Irish relocating to the four corners of the globe Mulhern believes that they have a “hankering after a piece of home.” Their pubs, though only a novelty provide Irish expats with that taste of home.

Mulhern had been working for Heineken for 12 years. She and her partner, Paul, had the idea that from $343 upwards customers could rent these inflatable structures, for their own backyards. The party hosts would have to provide the booze and food but the initial unit would have “a standing capacity of 80, along with the flooring, lighting, bar, optics, taps, and furniture for 20 sitting.”

The mother of two say the Pop Up Pub venture as a way to get off the road and spend more time with her family. Fifteen months later it seems the sky’s the limit for Mulhern’s business within the US market. The 41-year-old, former Heineken employee, told IrishCentral that “this week we had an invite to the Cleveland Celtic Festival.”

“We have two innovative and respected US manufactures on board and we have the words first Irish Thatched Cottage Air Building being made for the Ohio Celtic Festival 11th August,” Mulhern said.

The sky’s the limit for the Pop Up Pub as far as Mulhern’s concerned and so far she’s had interest from the United Kingdom, Canada, Dubai and Australia but for now their focus is on the US market.

For now Mulhern’s plan is to maintain the quality of her inflatables, create a further range of Irish themed air buildings and structures and even provide bespoke designs and products.

Mulhern is also delighted that her booming business is providing jobs to her home county, Donegal. She explained “We decided to develop a brand which would be a premium product. Offering four years warranty on units and an Irish based sales and marketing department driving bookings and offering support to our agents…Design and print work will be based out of Letterkenny in Donegal with the unit frames being US.”

Keep an eye out around the US this summer, you never know where these Irish pubs might pop up.

Here’s some dramatic drone footage of a recent event, in Rosapeanna Golf Resort, where Pop Up Pubs were used:

For more information visit www.popuppub.com or their Facebook page.