Pop up your own Irish pub – The local can be this local! http://irishecho.com 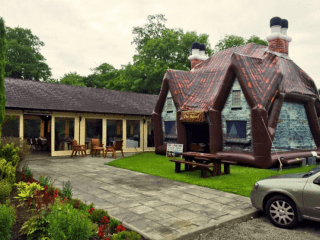 One of Ireland’s greatest exports is arguably the Irish Pub with even Kabul in Afghanistan boasting such an establishment.

But if you’re an expat or member of the diaspora who doesn’t live near a city with an establishment and want to experience the unique atmosphere what do you do?

Thanks to Catriona Mulhern, the pub can now come to you.

The Pop Up Pub is an inflatable Irish pub that can be erected in your back yard and bring that authentic Irish pub feel to any occasion.

Mulhern told the Irish Echo she came up with the idea during the economic downturn when emigration was increasing and people didn’t have as much money to visit pubs.

“Having worked for Heineken Ireland for fourteen years in direct sales it was apparent that people hosted events in-house more and more, and the local pub was no longer the venue of choice,” she said.

“The price differential between alcohol in the on trade (bars and pubs) and the off trade (supermarkets etc.) meant it was a much more attractive proposition to have guests bring their own drink to a party held at home.

“I recognized that throwing a party at home was not easy and a lot of time and effort was required and decided there was a market there to provide fully furnished temporary structures for these events.”

After coming up with the “pop up” idea, Catriona had to source the “pub” and invested in three of the structures which were rented out throughout Ireland.

It was then that the company looked towards the United States.

“As a result of much media attention that we received February 2015 that we started receiving enquiries from around the world, looking to hire or buy these units.

“We then began researching the possibility of creating specifically Irish themed air buildings (which hadn’t been done before) to cater for this audience.

“In March 2016 our first Irish thatched cottage air building was shipped to New York and it is currently being used as a marketing tool and for use at trade shows across the U.S.

“On the back of this we have had many offers of partnership and individuals wishing to become agents in the US. Currently we have agents in Kansas, Boston, New York and most recently Ohio.”

Catriona said she sees a bright future for the business.

“We believe given the huge market that is our diaspora that there is a great opportunity for individuals to set up pop up pub businesses across the world.

“Having road tested the business model here in a most rural part of Ireland, Donegal, total population 162,000, we are confident that the concept will flourish in large populated areas around the U.S. and Canada.

“So far all our agents are Irish Americans and we see this as a novel and unique business opportunity for ex-pats abroad who most likely are involved in their local Irish American communities and have a ready-made market.”

As well as the pub, a pop up thatched cottage is also available and the temporary structures can be adapted for non-alcohol use.

The company is also developing a “live-streaming” service to allow members of the diaspora to take part in events back in Ireland.

“The streaming will be fed onto specially designed projection screens integrated within the air buildings adding another level of functionality to our units,” said Catriona.

“So, besides offering our fellow Irish abroad an opportunity to become an agent for pop up pub we can also hire our units for parties, creating that elusive ‘piece of home’ in their back yard and live stream the events they are missing at home also if required.”

More information can be found at www.facebook.com/popuppub